Different projects can support each other

Participating different projects we came up with the conclusion that it is not only about to exchange experiences and knowledge, and to receive certain results and outcomes, but also to share with the others what is developed during the project implementation.

One of the possibilities is to provide the two-sided support between the projects of similar or close range. Therefore, in 2019 Gdańsk Water Utilities (GIWK) agreed to support South Baltic Bridge (SB Bridge) project during the Green Camp organised in Gdańsk on the 7th – 9th of October. The key element of the Camp was the challenge for teenage participants, who were to work in groups in order to think of the solutions for the problems notified by the companies like GIWK, invited for the co-operation. We decided to introduce two problems related to the international projects we take part in. Both problems are connected with the plastic pollution, however one in respect to the elimination of plastic products and the other in respect to microplastic threat. 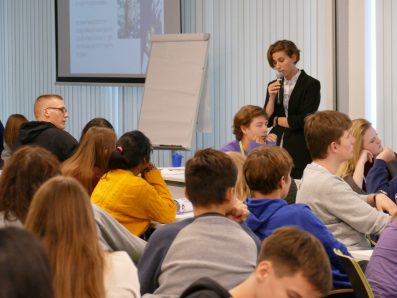 Before the groups started to work, they were supported with some basic knowledge as a helpful tool to understand the problem and the challenge itself. The results were presented the next day in front of the jury supplied by the representatives of the companies rising up the problems and of the Green Camp organisers (SB Bridge project partners). The outcomes were really surprising and we were very much impressed with the group’s creativity. For the first challenge, participants invented the seaweed as the alternative to replace plastic material. As the solution for the elimination/minimisation of plastic products entering the market, they proposed the tax on their producers especially regarding the commonly used products like plastic bags and bottles. They also proposed to introduce the refunds for innovative companies that actively reduce the use of plastic material in their production processes. Another good idea was to set up more appropriate filter systems for taking out plastic waste floating in the rivers before it reaches the seas and oceans. In order to support the implementation of such solution the groups proposed adjusting of drones so that they could recognise plastic in the water in terms of pointing out location for filter systems to be applied. At the same time, the new designed drones could be supplied with the long claw to be able to pick up bigger waste if recognised. 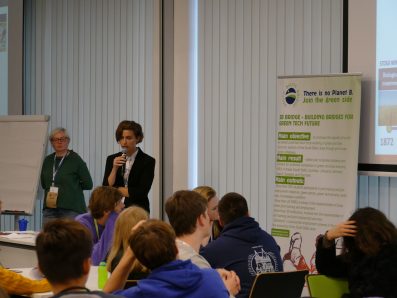 For “microplastic” problem the working group proposed the development of plastic eating worms and plastic decomposing enzymes manufacturing. The enzymes as a liquid could be sprayed over contaminated with microplastic ground in a way it is usually done with plant protection products. Such approach however, needs some additional researches including the long-term impact of the enzyme on the environment, the effectiveness of worms and enzyme application and on how those approaches should and can be controlled. Thus, for the prototype works the solution may need direct co-operation between scientist, business and producer sectors.

Our participation in this part of SB Bridge project was really a great experience. We could never think that young people can be so creative and inventive. It was really surprising and impressive that proposed solutions were so simple and within reach. In regard to bi-lateral support, the participants of SB Bridge project could gather lots of important knowledge from companies and their work (also within the projects) and we could posses some inspirations on how to solve the problems we were facing. We do find such co-operation valuable and we can advise it as a knowledge exchange tool to be applied by the others.

Subscribe to the FanpLESStic-sea news letter! Send an email to info@swrab.se to make sure you don’t miss what’s going on.