A new review, for which a summary for policy makers is also available, establishes a comprehensive baseline on the existing policies related to microplastics on global, Baltic Sea, EU, and national levels. The report also showcases some of the existing research on microplastics at these levels. 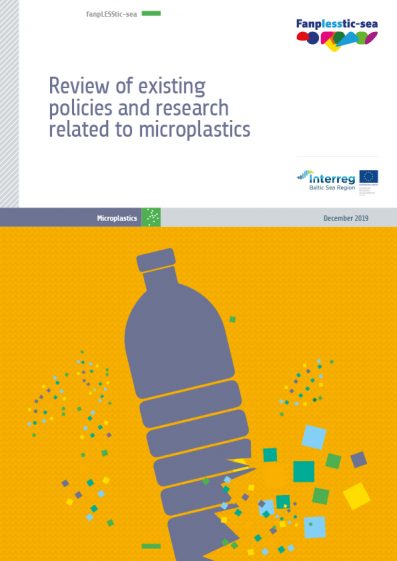 rally all over the place. But we’re still lagging behind when it comes to specific policies at the global and regional level on the issue,” said Matleena Vuola, the FanpLESStic-sea project coordinator at HELCOM.

“At the national level in the Baltic Sea region, Sweden is the only country that currently has a law regulating primary microplastics in cosmetics,” said Vuola.

However, there might be some substantial changes coming up along with ECHA’s proposal on a restriction on intentional uses of microplastics in products placed on the EU market and its implementation on national level.

The review, for which a summary for policy makers is also available, establishes a comprehensive baseline on the existing policies related to microplastics on global, Baltic Sea, EU, and national levels. The report also showcases some of the existing research on microplastics at these levels.

“We already have received some very good feedback about the report because it shows where we currently stand on the relatively novel and emerging challenge of microplastics,” said Vuola, adding that “it becomes now clear that we need to harmonize our methodologies to be able to compare studies for an even deeper insight on microplastics and their effects on the marine environment.”

Published on HELCOM’s website, the report was further promoted during several events. Its findings were notably presented during the BSSSC Annual Conference 2019 in Klaipeda, Lithuania, as well as during the DEEP Microplastics Challenge organized by FanpLESStic-sea in conjunction with the Helsinki Think Company and the Natural Resources Institute of Finland (Luke).

The report and further findings of the FanpLESStic-sea project will also be shared within HELCOM networks, and HELCOM is further planning an event to showcase the results of the project when it ends.

In addition to providing an overview of the regulatory framework and useful information on topics such as sources and types of microplastics, the report can be used as a database for large amount of concluded research on various topics around the issue of microplastics.

FanpLESStic-sea, an EU-funded Interreg project, works towards preventing and decreasing the pollution of microplastics in water in the Baltic Sea. In the project, HELCOM leads the work package on reviewing existing research on microplastic in the aquatic environment.